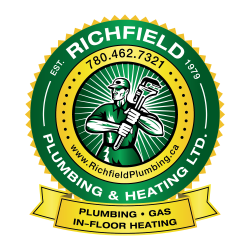 Family owned and operated since 1979, Richfield Plumbing & Heating provides knowledge and experience that benefit the customer. Our company’s history proves that we are reliable, professional and produce quality installations with an elevated level of skill and safety. Our plumbers and gas fitters are trained and care about each and every job and are proud to raise the bar to satisfy and protect their customers. Richfield services Edmonton, Sherwood Park, Beaumont, Leduc, St. Albert and the rest of Edmonton’s surrounding areas. Richfield works with both light commercial and residential properties and specialize in custom boilers and in-floor heating.

Richfield Plumbing & Heating was established on April 1st, 1979, by Vern and Linda Shoemaker. This was no April Fools’ joke, but a well thought-out, lifelong plan that would change their lives forever. It all started when Vern started plumbing and working with sheet metal in 1966 in Stettler, Alberta. Vern quickly became a leader in his field by being awarded the top marks in Alberta and running jobs as a second year apprentice (which he loves to point out to all the new apprentices!) Vern almost became a partner in that company but decided to move to Edmonton in 1971. For the next eight years, Vern worked with two companies and became one of the top employees at both but decided to venture off and become an owner of his own company in 1979.

Do you know why we are called Richfield? Many people think its Vern’s last name, but it is an area in Millwoods where Vern and Linda lived for ten years and ran the business out of their home/garage. Richfield moved out of that garage in 1983, and into a small warehouse condominium near Parsons Road and 29th Avenue. In 1987, Vern and Linda built their new home in Millwoods and included a second garage which Richfield Plumbing & Heating called home until 2010. At that point they moved into a larger location in the Strathcona Business Park. Again, after several years of success and company growth, Richfield moved into their current storefront/shop location on 51st Avenue and 87th Street.

Richfield began by doing mostly commercial projects in the early 1980’s including many Millwoods’ community halls, but started doing more residential projects by the end of the 80’s. In 1987, when Vern built his house, he tried something new, something that would define Richfield to this day - hydronic in-floor radiant heating! Hydronic in-floor heating was just beginning to come to the mainstream market and Vern would not feel comfortable installing a product into a client’s home without being 100% sure of the entire process it entailed. Already having years of experience with boilers and baseboard heating, Vern’s first project was such a success that he began making the transition to in-floor heating. Richfield was beginning to get recognized as a leader in the industry and was one of the first to build the custom boiler system (we call them heating boards) in the shop and transfer them to site to make the final connections after.

Richfield continued their success into the next century but remained relatively small and true to their roots to maintain quality. The main difference now is Vern and Linda’s son, Dan, decided to come aboard and help the family business. In 1995, Dan first started helping his Dad out on the job site working on in-floor heating jobs and other light duties. In 2003, Dan finished high school and decided to join Richfield full time and never looked back. Dan eventually became an official part owner at the end of 2010 and sole owner by 2016.  The combination of Vern’s older, tried and true methods with Dan's advanced computer skills, understanding of technology and new way of thinking helped to propel Richfield into the strong, competitive company that it is today and will be for years to come. Richfield has scaled down its new custom home builds, large renovations and in-floor heating installations and is now running full speed ahead with residential service and is continuing to expand this division.